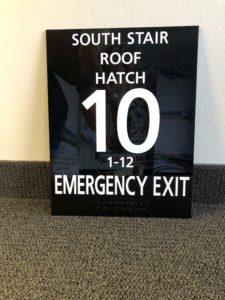 In Texas, as in other states, it is illegal to discriminate against people with disabilities. This is thanks to the Americans with Disabilities Act, a 1990 federal civil rights law and subsequent federal, state, and local laws. ADA laws are in place from Carrollton, and all over Texas. Part of making your Texas business accessible to all includes ADA signs.

Large text, easily-read fonts, clear color schemes, and proper placement are all key for ADA signs. You must ensure the signs in your Carrollton business tick these boxes.

According to the National Institutes of Health, there are over a million blind Americans. Expand that category to include everybody with poor vision of some kind and that number increases to between three and four million. According to the National Federation of the Blind, there are over 700,000 Texans living with visual disabilities. You need a local Texas sign studio who knows the relevant ADA laws in Carrollton to make your ADA signage.

Benefits of Choosing Us for ADA Signs in Carrollton, Texas

ADA signs are not just about making sure you can serve 700,000 Texans with poor vision. It’s also about avoiding hefty fines. At SignCraft and Graphics, we can ensure the signs at your business in Carrollton, or nearby in Texas, are fully ADA compliant.